I knew I had to go to this game when I saw this on the Kernels website:

Jose was scheduled to take part in a softball home run derby and sign autographs, and I was excited to go. When I arrived an hour before the game started, many people were already inside:

Luckily, most people were only there to see Canseco, and he was signing for over an hour. I made my way to the Kernels dugout to watch the home run derby. Canseco looked like he could still hit a MLB home run!

After the derby, I got in line for Canseco’s autograph. I ended up going through the line twice and getting a ball and a card signed.

Overall it was a pretty good day!

First off, sorry it has been so long since my last post. I will try to post more often. However, my trip to Arizona Fall League is finally here, so enjoy! My first game was at Cubs Park between the Mesa Solar Sox and the Surprise Saguaros. I was ready to go! 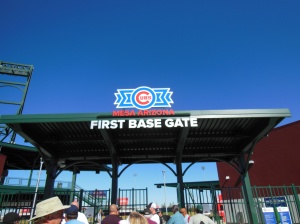 First, I made my way over to the right field line, where some Peoria pitchers were warming up. I decided to get one ball signed by both teams, since the players are from different MLB organizations. I got a few autos, then went to the Solar Sox dugout. This was my view of where the players would enter:

It was a great spot. Every player stopped to sign, and I walked away with tons of autographs (Pictures are at the end). The game got underway, and this is where I stood:

This spot was perfect for snagging foul balls from right-handed hitters. I ended up with three baseballs, including 2 foul balls and 1 third out ball. They even had a new commemorative logo!

All items from the game

Thanks for reading! I will post the other two AFL games in the coming days. Please comment and spread the word!!!!

Just a quick post, some show and tell. I picked up this Miguel Sano autograph card for just $5.50! My favorite team is the Twins, so this was a great deal! 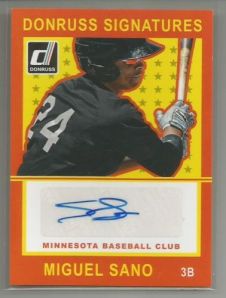 I had already got one of him when he was in Beloit in 2012, but it was still pretty cool. There will be another post tomorrow or Thursday.

I just thought I would do a quick game recap from last year. Last year, I attended the 2013 Arizona Fall League Rising Stars Game. Played at Surprise Stadium, this was a great game to attend. 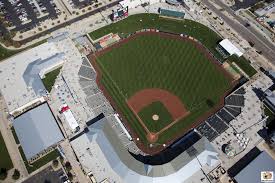 . The rosters were crammed with Top Prospects, so the autograph opportunities were endless! I decided to get a game program signed, because there were pictures of all the players in it, so it was a great item to get signed. Here are some pictures: 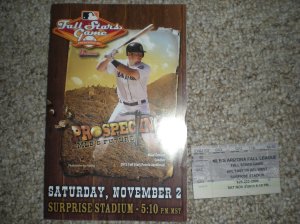 Sorry for the low quality photos. I will try to work on those. I was very excited, because I got Kris Bryant, Alex Meyer, Addison Russell. I can’t wait to see where these guys end up in the future.

Thanks for reading! Please comment with suggestions. More posts are on the way!

Over the years, I have accumulated a lot of memorabilia. While most of it is baseballs and broken bats, there are some other unique items. Here they are: 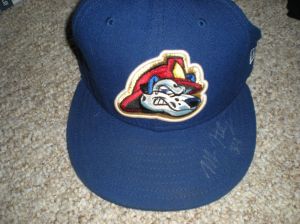 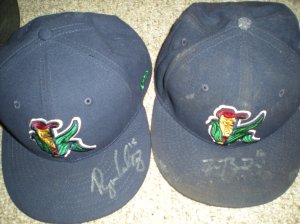 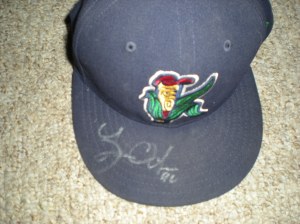 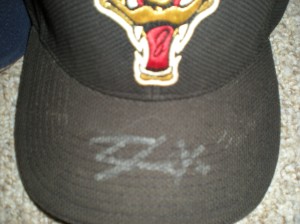 As you can see, I have 3 “unknown” players in my collection. If you recognize any of those signatures or know someone who would please leave a comment. Thanks for reading and spread the word!

This game was played in Midland, MI at beautiful Dow Diamond. This state-of-the-art stadium is one of my all-time favorites. 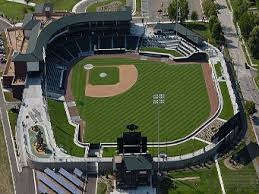 I arrived early, thinking I could see into the stadium from the outfield (This was the first time I went there), but there was a large wall that made it impossible to see inside. I walked around the stadium, and found a few players milling about outside the clubhouse. I was able to get a few autographs before the gates even opened!

The gates opened and I got some autographs from the Loons. The game started, and everything was good. The rain that had been foretasted had held off, and we had ourselves a ballgame! The game was tied at 1-1 and went into extras. The ballpark had significantly fewer people than at the start, so most of the stadium was empty! Finally, in the 12th inning, Franmil Reyes broke the deadlock with a bomb to left-center field. I sprinted out of the stadium and was able to get the ball!

The game ended in the bottom of the 12th, and I went for TinCaps autographs. When I walked out of the stadium, I had come away with TONS of stuff! Pictures below. 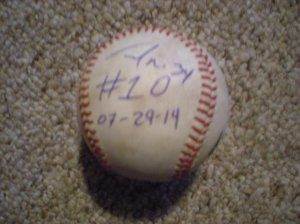 For the past 4 years in October, I have traveled to the Arizona Fall League. It is an off-season league featuring some of the games top prospects. 2010 was my first time going, and it was amazing. The final game I went to was the “Rising Stars Game”, which was basically an All-Star game. There were many future MLB players at the game, such as Steve Cishek, Ben Revere, Charlie, Culberson, Brandon Belt, and Eric Hosmer.

The game was tied in the 9th inning when Leslie Anderson stepped up to the plate. I was standing near the lawn in the outfield when he hit the walk-off home run, and I was able to get it!

I then raced across the stadium to try to get it signed. I caught up with him just as he was going to enter the locker room. I yelled,” Could you please sign your home-run ball and write ‘Walk-off HR’?” He signed the ball, but didn’t inscribe so I asked if he could write Walk-off HR. When I handed him the ball, he signed it again. It was still a cool souvenir, but it stunk that he signed it twice! 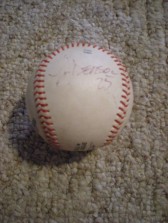 The next few posts will be recaping my favorite baseball games I have attended. Pictures will be included!

I have been going to Minor League Baseball games for around 5 years, and they are one of the most exciting experiences for me. I love the laid back atmosphere, as well as easy access to the players. Watching Minor League Baseball is the best way to see future stars such as Mike Trout before they become huge(Mike Trout is my favorite player, more on that later). I enjoy collecting baseballs as well as autographs. On this blog, I will show you my tips and tricks for getting both things.

Hello baseball fans! I am a huge baseball fan who loves collecting the game, from baseballs, card, autographs, and more. I love attending Minor League Baseball games, mostly in the Midwest League. I hope you find this blog entertaining and informative. Please spread the word!